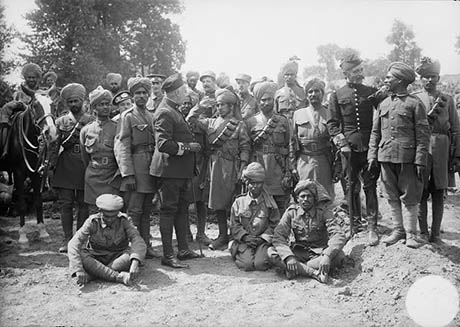 Alliance Française de Trivandrum, Goethe Zentrum and Russian Cultural Centre are jointly presenting a commemoration of the centenary of First World War, with a photo exhibition, discussion and film screenings.
2014 will mark the hundredth anniversary of the outbreak of the First World War, a tragic conflict that has shaped world history ever since.

Guerre et colonies/ War and Colonies, 1914-1918: An exhibition of 35 rare photographs of colonial troops in the Great War.

The impact of the First World War on the colonies was profound and many-sided. European societies were put in direct contact with the colonised. The conflict had special relevance to the Indian subcontinent as Britain, the ruling colonial power mobilised 1.5 million Indian soldiers during the war, of which about 90,000 were killed. Some 150,000 Indian soldiers were deployed in Europe from September 1914 on.

The exhibition featuring 35 photographs of French and British colonial troops in the Great War: Soldiers – African, North African, Irish, Indian and Indo-Chinese – and also of Chinese workers, were selected from French, German and Irish archives. This exhibition brings to focus the relationships between war and colonies and will shed a new light on a part of history that is often overlooked, if not completely forgotten. Thus acknowledging the hundreds of thousands of men who either fought along with European troops, or contributed to overall war efforts.

Guerre et colonies/ War and Colonies, 1914-1918 exhibition will be inaugurated in the presence of Philippe JANVIER-KAMIYAMA, The Consul General of France in Pondichery, Uwe Hahn, The chancellor of the Consulate General of Germany in Bangalore  and Ratheesh C. Nair, The honorary consul of Russia on 17 October, 6.30pm @ Alliance Française de Trivandrum.
The inauguration will be followed by a talk on Reconciliation in today’s World by Dr. George Mathew.
To commemorate the occasion, there will be two films screened.
18 October, 6.00pm @ Goethe Zentrum
The Halfmoon Files/ Philip Scheffner/ 2007/ 89mins
Mall Singh’s crackling words are heard as he spoke into the phonographic funnel on 11th December 1916 in the city of Wünsdorf, near Berlin.90 years later, Mall Singh is a number on an old Shellac record in an archive – one amongst hundreds of voices of colonial soldiers of the First World War.
In The Halfmoon Files, Philip Scheffner follows the traces of the voices to the origin of their recording. Like a memory game – which remains incomplete right until the end – he uncovers pictures and sounds that revive the ghosts of the past. His protagonists’ words intersect along the concentric spirals the story follows.

23 October, [email protected] Alliance Française de Trivandrum
La grande illusion/ Jean Renoir/ 1937/117mins
A 1937 French war film directed by Jean Renoir, La Grande Illusion is about soldiers escaping war camps to freedom. Set during World War I, La Grande Illusion recounts the experiences of three French prisoners of war and the complex relationships with their German captor Von Rauffenstein (Erich von Stroheim). Sharing bonds of class and tradition, the French and German officers soon realise they have more in common than they had imagined. This powerful indictment of war boasts sensitive performances from its cast and assured direction from Renoir.