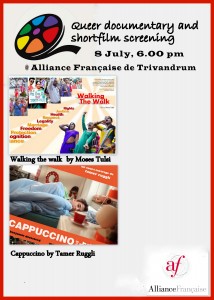 An awareness program, on the occasion of 6th Kerala Queer Pride, with screenings of a documentary and a French short film, followed by an interactive session will be held at Alliance Française de Trivandrum on 8 July at 6.00pm.. The films focus on queer lives and related issues.

The discussion panel will have a few speakers both from the LGBT community in Kerala and academicians.

The films screened are:

Despite his marginal and extrovert looks, Jeremie is a shy teenager who keeps a heavy secret: his homosexuality. While trying to find his way between his classmate and sexual fantasy Damien and his very generous but protective mother Gina, his life is about to change. A mother’s love, despite her own misfortune, is expressed in a very subtle way. The French short film depicts the dilemma followed with gender and sexuality identities

Walking the Walk follows the participants of Hyderabad’s queer pride march in February 2015. The walk draws inspiration from this most recently successful social movement which led to formation of a brand new state in India, Telangana. This film demonstrates how a collective of activists do more than talk the talk; they set into motion a political movement that celebrates small successes, demands resources for working-class transgender people, stands up to police violence, and allows the community to grieve for lost loved ones.