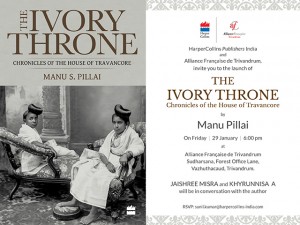 In 1498, when Vasco da Gama set foot in Kerala looking for Christians and spices, he unleashed a wave of

political fury that would topple local powers like a house of cards. The cosmopolitan fabric of a vibrant

was ripped apart, heralding an age of violence and bloodshed. One prince, however, emerged triumphant

consecrated the dominion of Travancore, destined to become one of the most dutiful pillars of the British

Raj. What followed was two centuries of internecine conflict in one of India’s premier princely states,

Manu S. Pillai’s retelling of this sprawling saga focuses on the remarkable life and work of Sethu Lakshmi

Bayi, the last, and forgotten, queen of the House of Travancore. The supporting cast includes the flamboyant

Extensively researched and vividly rendered, The Ivory Throne conjures up a dramatic world of political

harnessed in a tragic contest for power and authority in the age of empire.

Manu S. Pillai was born in Kerala in 1990 and educated at Fergusson College, Pune, and at King’s

College London. Following the completion of his master’s degree, where he presented his thesis on

the emergence of religious nationalism in nineteenth century India, in 2011–12, he managed the

DL, a crossbencher at the House of Lords in London in 2012–13. That same year he was

series, which tells the story of India through fifty great lives. The Ivory Throne is Manu’s first book.