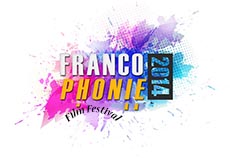 Discover a francophone movie every Saturday from 1 March to 22 March at 4.30 pm @ Alliance Française de Trivandrum!

Follow a French in Romania, an impossible love story in Paris, Canadians in France and French in New-York. Four stories completely different, each showing a unique facet of the francophone culture.

1 March, 2014
Gadjo Dilo “Crazy stranger”/ Tony Gatlif/ 1997/ 1h40min
Stéphane, a young French man from Paris, travels to Romania. He is looking for the singer Nora Luca, whom his father had heard all the time before his death. The only person in the village who speaks any French is the tough Sabina, a divorced Romani dancer who is blatantly hostile towards him at first, but the pair eventually bond through a series of trips across the countryside to record traditional Romani music.

8 March, 2014
Les chansons d’amour “Love songs”/ Christophe Honoré/ 2007/ 1h
Ismael lives with Julie. Alice, who works with Ismael, shares their bed and Alice’s affections. On a night of tragedy, Jeanne, unawares, hooks up with Gwendal whose teen-aged brother Erwann is the only one who can bring a shattered Ismael back to life. With rain-slicked streets, coffee and cigarettes, references to a dozen French classics, a haunting score and the best balcony scene since “Romeo and Juliet,” this low-budget charmer, which has become a cult favorite in France with the under-25 set, is an “Umbrellas of Cherbourg” for the 21st Century.

15 March, 2014
French Immersion/ Kevin Tierney/ 2010/ 1h40 min
A contemporary comedy about five Anglo-Canadians – actually four Anglos and a New Yorker  who find themselves in a two-week total immersion French program in a remote town in Northern Quebec. The place is perfect for total immersion, since according to the most recent census the population is 97% Quebecois “pure laine,” unilingually French, and fervently nationalist. No one is quite sure who or what the remaining 3% is.

22 March, 2014
2 days in New York/ Julie Delpy/ 2012/ 1h35 min
Parisian Marion is living in New York with her son, in order to be closer to Jack, the boy’s father (Marion’s ex-boyfriend from 2 Days in Paris). She and her new boyfriend Mingus have a cozy relationship until the arrival of Marion’s father, sister and sister’s boyfriend, on vacation from France. The group’s two days together are tested by “unwitting racism and sexual frankness”, with no one left unscathed.