HUMAN: A film by Yann Arthus-Bertrand 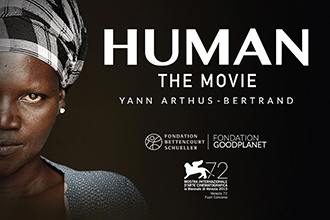 HUMAN is a collection of stories about and images of our world, offering an immersion to the core of what it means to be human. Through these stories full of love and happiness, as well as hatred and violence, HUMAN brings us face to face with the Other, making us reflect on our lives. From stories of everyday experiences to accounts of the most unbelievable lives, these poignant encounters share a rare sincerity and underline who we are – our darker side, but also what is most noble in us, and what is universal. Our Earth is shown at its most sublime through never-before-seen aerial images accompanied by soaring music, resulting in an ode to the beauty of the world, providing a moment to draw breath and for introspection.
HUMAN is a politically engaged work which allows us to embrace the human condition and to reflect on the meaning of our existence.

Yann Arthus-Bertrand is a photographer and renowned specialist in aerial imagery. He has written several books, including “The Earth from the Air”, which has been translated into 24 languages and has sold more than three million copies.
In 2009, he made his first film, “Home”. This inventory of the planet was seen by more than 600 million people around the world. Available for free from YouTube, it is continuing its career. It is the most successful environmental film of the decade.
“7 Billion Others”, a portrait of humanity today, has so far been seen by 350 million people. This major exhibition that was inaugurated at the Grand Palais in Paris in 2009, before going on to travel the world, is a personal reflection developed over the space of 30 years.
It was the first step on the path that led Yann Arthus-Bertrand to make “HUMAN”.